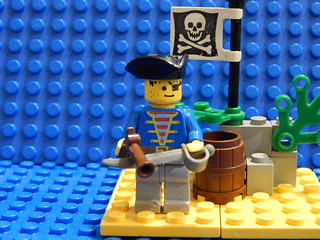 The first Old Fig. Von Sea is a marooned pirate. He used to be part of Black Eye's crew (We think) but after the Loopin Incident, he was banished to a tiny island. thankfully, it's a magic island with a magic barrel. After many years alone and going crazy, he formed M.A.P after meeting Flint Locke. After the disapearance of M.A.P. he has gone on to gather Old Figs willing to help, in order to save his crew.

The only unchanged Old Fig from Sea Mates, the second set. A quieter fellow, but not to be underestimated. Sails with Admiral Gerard most of the time Admiral Gerard, the Highest Admiral in the Imperial fleet. The most respected minifig. The most feared Pirate captain out there. Briefly was under the command of Captain Har Har, but after a power struggle, took command of the Cross Bone Clipper, Har Har's ship, and has risen in power ever since. Leader of the Spyrius nation. Mostly keeps to his planet. Won the 2002 Christmas Tournament.

7 Sir Alexander (The Axeman) and 8 Orson the Oarsman Sir Alexander is a knight in the Royal Knight Kingdom He won the 2013 Christmas Tournament. Oarson is a loyal soldier in his shadow. After jumping from job to job, Mr Freestyle finally settled down as the full time judge in the annual Christmas Tournaments. Doesn't have much respect from his peers, due to his timid nature.

The toughest Liki Islander you will ever meet. A bit of a recluse these days, he prefers to stay in the company of crocodiles. Was in the 2015 Crossover Championship. Missing ever since A colonol in the Wild West. An all around good guy and willing to fight the good fight.

A bandit and arch nemisis of Colonol Anthony. An all around bad guy who will fight the bad fight.

A world renown racer. Doesn't like to acknowledge his small town roots anymore. May be under the influence of Rump. Collectively known as the Divers, these guys like to explore the ocean. The occasionally run into Von Sea, but only when they get lost. One of these guys holds a dark secret.... The sour Aquanaut. Knows the Aquasharks are cooler, and hates it.

The slightly dimwitted Aquashark. Used to have a hook, but it was cut off and he replaced it with a hand. Wait, what? An officer in the Aquashark Army.

Leader of the small Adventurers group. Won the 2003 Christmas Tournament. The Time Cruisers. Dr Cyber, the inventor of the Hypno Disk and thus limited and finicky time travel. Dimmard, or Dim is his assistant. The Crankbot is a robot they rebuilt from the Exploriens. Skell E. Ton is a skelleton that talks and walks. A Fright Knight who is more than he seems The semi-retired Doctor and former mayor of Gerton. Loyal crew and 2nd mate to Black Eye. The only female Old Fig. Former great pirate captain. Now a drunken bum. Still sails on the Cross Bone Clipper, even though the ship stays at port the whole time.